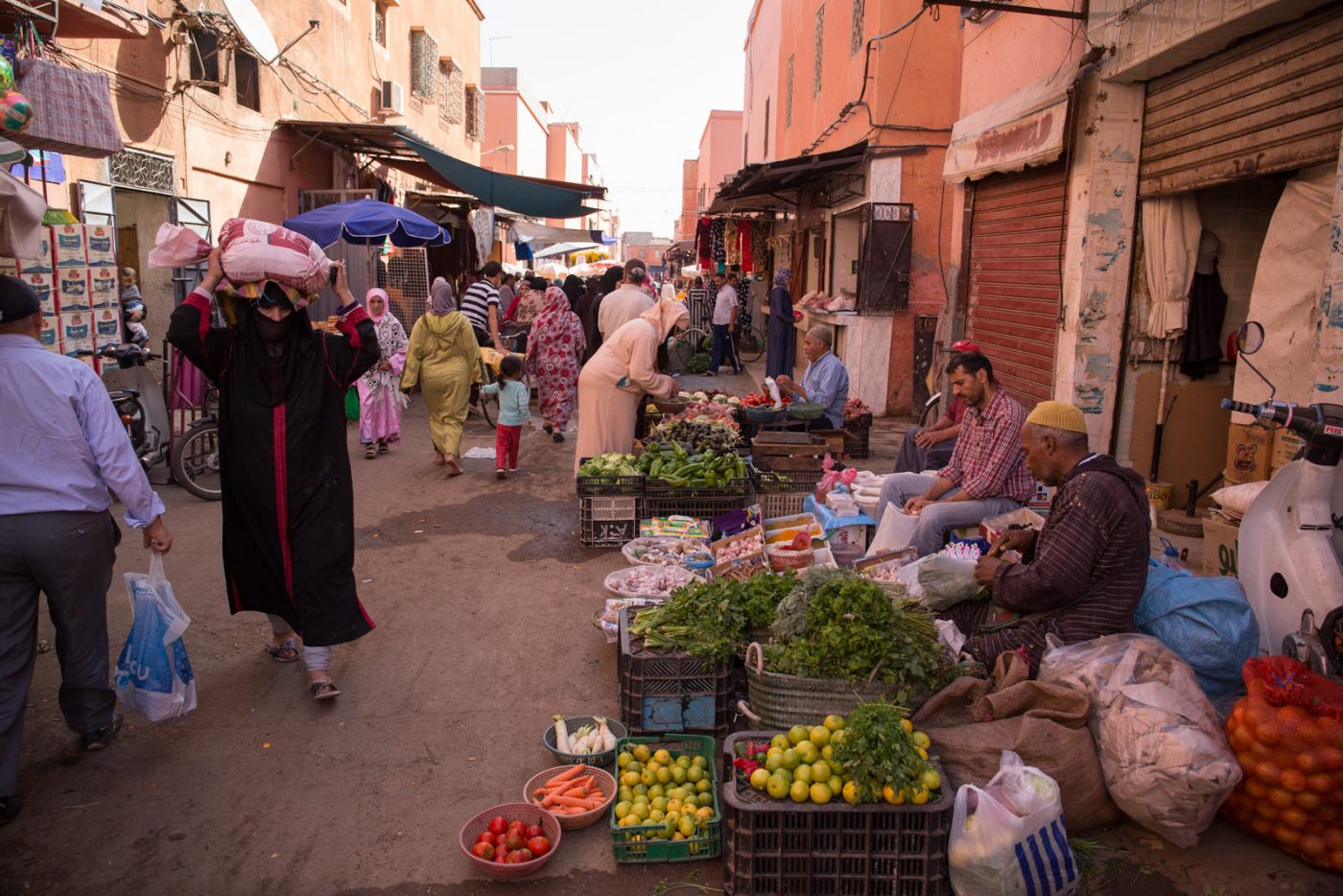 Navigation is difficult in Marrakech, even with a map. Using my HERE WeGo app kept me going in the right direction.
Computers & Tech
·8 min read

I just returned from a two month trip to Europe and Africa, including twelve countries and more cities than I’m willing to count, and having a working smartphone made my life a lot easier. In fact, there are a couple of times that I’d really have been in trouble without it. So, here are a few of the apps and things that I used: some of them are obvious, some of them less so.

Hope that you find them helpful. I use an Android phone, but most of these should be available for iPhones, too.

Here WeGo is a map and navigation app, but the advantage over Google Maps is that you can download the maps for whole countries in advance (while you’re connected to a fast WiFi connection) and you can then use your phone’s GPS capabilities to navigate anywhere, without using roaming data.

You may not have heard of Here maps, yet, but their maps are now used in all new Hyundai navigation systems, as well as many European cars.

I’m a huge fan of The Photographer’s Ephemeris (TPE) (you can see my video about how to use it on YouTube). No matter where you are in the world, TPE will give you the exact time of sunrise and sunset at your location, even taking into account obstructing mountains or other geographic features, and it will also tell you exactly where the sun and moon will rise and set. It’s prefect for planning landscape shots when you’re in a new location.

The same is mostly true of Exsate Golden Hour, plus it gives you the time of the blue hour, astronomical events of interest, and it also gives you recommendations based on the weather. Exsate is actually FREE and works offline.

I spent about a month and half in Croatia, Hungary, and the Czech Republic, and I don’t speak any Slavic languages. One of the great things about the Google Translate app is that if you need to read signs, menus, labels in stores, etc, you can select the language in the app (language info can be downloaded for offline use), point the camera at the text, and it will be translated in real time. It works amazingly well. Of course, you can also type in phrases to translate, and you can capture audio of people talking and it will translate that. I didn’t use it that way, so I don’t know how well that works.

Not everyone will want to deal with this, but VPN Master is a simple, free security app. A VPN is a “virtual private network”, and the app allows you to connect to the internet through an encrypted, private network proxy. This has two benefits. First, it keeps your data secure when you’re using open WiFi networks. One of the places that I stayed in Germany had WiFi, but it was open to the public, meaning that it would be easy for hackers to intercept my data (credit card info, passwords, etc.). This encryption keeps you protected. Second, when you connect through the VPN, your connection to the internet appears to be coming from the location of the proxy nation (USA, UK, and Netherlands are the default options), so if you’re traveling in a nation that blocks certain websites, you’ll be able to get around those blocks.

There are two drawbacks, with this app: first, it’s ad supported (but free!) and the ad popups can be annoying. Also, connecting through the VPN is slower than connecting without it. It’s a great option if you only need to use it rarely; if you need something frequently, then it’s better to pay $10/month or so for a faster, ad-free VPN.

I’m breaking the rules of the list, here, because this it’s not just an app, but it’s a cool thing, and I found it very useful (though perhaps not perfect). KnowRoaming is a SIM card sticker and pre-paid phone service that works all over the world. What’s a SIM card sticker? This is a small, electronic-chip sticker that you stick onto your existing SIM card, and when you enter a new country, your phone detects the change in location and switches from your home SIM card to the sticker SIM card, and you get a text message telling you the call/text/data rates for the country you’re visiting. They’re generally very reasonable compared to using Verizon/T-Mobile roaming rates. You’ll also get additional UK and USA phone numbers for free, and you can add more international phone numbers as well.

I found that with judicious use of data and texting (incoming texts are usually free) and only calling home rarely (preferring Skype or Google Voice/Hangouts from hotel WiFi), I paid about $35 per month. It’s not great, but it’s pretty manageable, all things considered.  If you are working on a data intensive project and need lots of data, you can pay for unlimited, fast data for about $8/day in most of Europe.

That said, it didn’t work for me in Hungary, and it was pretty expensive in Morocco.

If you’re traveling in Europe, these are great. I started traveling with the Swiss (SBB), Austrian (OBB), and German (DB) train apps on my phone, and was able to purchase my train tickets weeks in advance and store them on my phone, without having to keep track of bits of paper or print anything out… conductors can scan your phone. Very handy, and most western European nations have a train app available.

The most helpful thing for me was that the apps give you up to date information about what platform your train will be on, so even if I need to change trains three times during a trip, I always know in advance where I’ll have to go when I arrive in a new station, so I’m less likely to miss my connection.

On a whim one afternoon, I hopped on a bus to Ston, Croatia. During the two hour ride to the village, I opened the Booking.com App, checked out the available lodgings, and found a great place to stay (for only $25/night). When I got there, the app sent the address of the hotel to HERE WeGo (see above) so that I could get GPS direction to the front door, if I wanted it. I used AirBnB to rent an apartment in Croatia for a month, and was able to pay in advance, online.

In the past, I’d just show up in a city and start calling around or visiting a tourist office. With an app like these, you can book everything in advance, quickly (all over the world) and with plenty of information about the accommodations. I admit, it takes a bit of the adventure out of unplanned traveling, but it adds a bit of security.

The US State Department runs a program called STEP, the Smart Traveler Enrollment Program. If you’re traveling in parts of the world where there’s any political instability or threat from terrorists, this is a particularly good idea, but it’s a good idea regardless.

The STEP program allows you to register with the US Consulate wherever you’re traveling, so that if anything goes awry, the US government will know that you’re there and will be able to help get you out. It’s quick and easy.

Also, the app gives you up-to-date information about travel risks in any country that you might be thinking about visiting. For example, I was thinking about visiting Turkey, but was able to see that the State Department is currently ordering the departure of family members of consulate employees in Istanbul due to high threat, and was able to take that into account in my decision.

The app also provides useful information about visa information, health, and local laws, and of course, embassy and consulate locations.

There are plenty of good currency conversion apps, but you should get at least one of them. Yes, you can always Google a conversion, but it’s handy to have a dedicated app because it’s quick to launch, and with apps like Easy Currency Converter, you can use it offline and not waste your mobile roaming data.

If you’re traveling in a lot of different countries that don’t use the Euro, it’s easy to lose track of rates and start spending more money than you’d intended. Having an easy converter handy helps.

With its recent updates (now supporting RAW files!), Lightroom mobile is a great app to keep nearby. Since I travel with my Surface Pro 4, which runs a full version of Photoshop/Lightroom, I don’t need the mobile app for editing and organization, but if you’re traveling with a standard Android or Mac tablet, Lightroom will get the job done.

Perhaps more important for the rest of us is that Lightroom can now be used with your phone to shoot RAW images, so you won’t be limited to your standard phone JPGs. Consequently, you’ll get more color flexibility, more shadow and highlight detail, and all of the other benefits of capturing RAW data.

To use all of the app’s features, you need to be a Creative Cloud subscriber.

Got an App You Can’t Live Without? Let Us Know

Do you have an app that’s really useful, that I should know about? Let us know in the comments below.