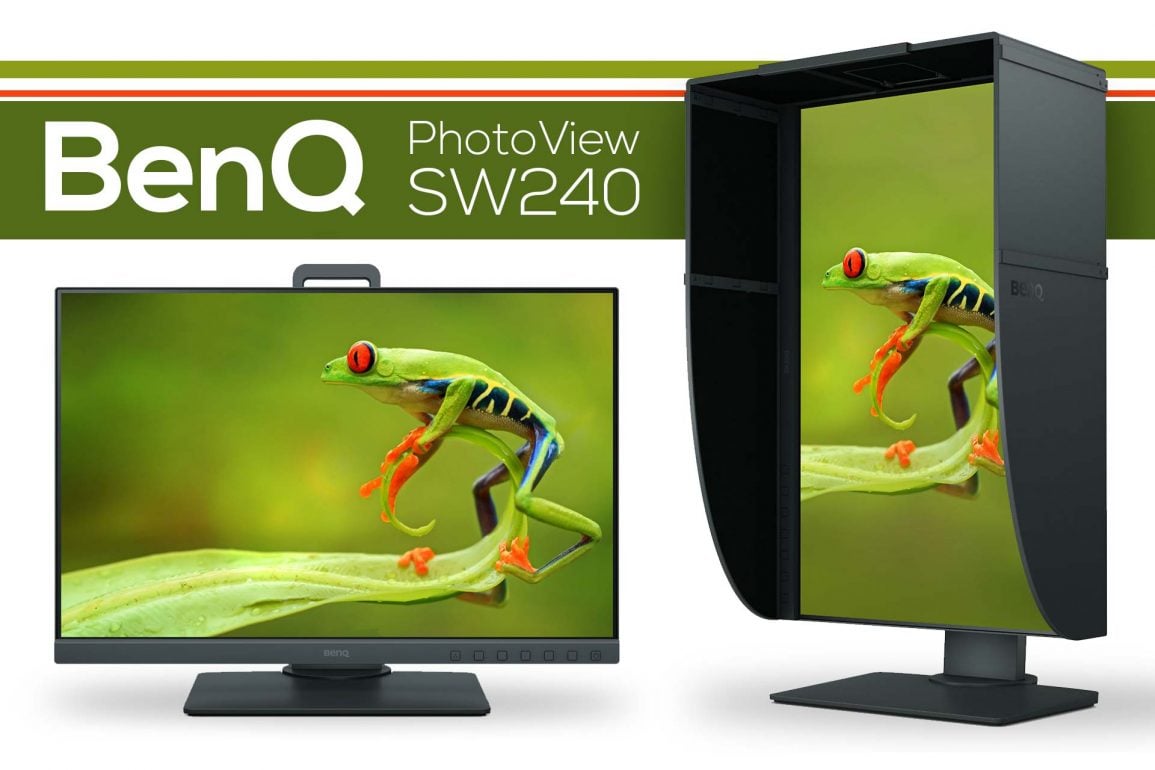 I’ve spent most of 2018 testing BenQ monitors (SW271 4K, SW2700PT,  and now the  SW240), and though each has its own niche, they all have one thing in common: a remarkably high standard of quality and excellent feature set at a reasonable price. The SW240 may be the only new monitor on the market in this size and price range that can deliver 99% or more of the AdobeRGB color gamut. This means that you can see your images in more life-like color, and if you’re making high-quality prints, you can display more of the colors that will show up on paper.

Still, $399 is a higher price than usual for a 24″ monitor these days. Does the BenQ SW240 live up to its claims, and is it worth the price? The quick answer is yes. Let’s take a look at the details.

Like its more expensive big brothers, the SW240 ships with a factory calibration report in the box, and the usual assortment of cables (DisplayPort, HDMI, USB, power). Unlike the previous BenQ monitors that I’ve tested, there was no quick-control pad (puck) enclosed, nor was there a monitor hood, although a hood is available separately for an additional $99.

The BenQ SW240 shares many of the design features of the more expensive PhotoVue series monitors. Its simple, black housing is understated but attractive without being trendy. Its bezel is the thinnest of any PhotoVue monitor yet, at only ~1/16″ (2mm) thick, and since it has VESA mounting holes (100 x 100mm), it’s a good candidate for those who use dual monitors, though it’s worth keeping in mind that the actual picture does not reach all the way to the bezel; they’re separated by a 1/4″ (~0.5 cm) border at the top and sides.

Like the SW2700, the screen is mounted to a tall post that allows for plenty of height adjustment (from 2.2″ above the desktop up to about 7.7″ above it), allowing the screen to be rotated a full 90 degrees to be used in the vertical position, if desired.

However, while the SW240 does have an SD card reader and two expansion USB ports, their placement is inconveniently recessed on the back of the monitor, making them tricky to use. I use one of the USB ports for a color calibrator and the other for an accessory BenQ ScreenBar light (full review here), since they can be plugged in and forgotten, and the SD card reader is simply ignored.

BenQ luckily didn’t make any changes to the excellent screen surface of their PhotoVue line for the SW240. It remains excellent, with a light matte finish that reduces glare but doesn’t significantly reduce screen contrast or sharpness, or produce a grainy finish. It’s a great compromise, though there will always be people who prefer a glossy finish. Since the panel is an IPS, colors are consistent even when viewed from a strong angle, and the surface finish does not seem to have a negative effect here.

The panel’s backlight is very good, but not quite as flawless as the Sw2700 and SW271. Overall, I found no light bleeding around the edges of the bezel, and the color appears to be consistent across the screen. However, I did notice that the first two inches on the right edge of my monitor were slightly dimmer than the rest. Though it is subtle enough to not be a practical problem, it is noticeable with the naked eye when medium-brightness tones are displayed, though it disappears in very bright or dark tones.

The color performance of the SW240 turned out to be the best that I’ve tested to date.  According to my colorimeter, the monitor produced 100% of the sRGB gamut, and also 100% of the AdobeRGB gamut, with ΔE numbers all resting well below 2.01 Delta-E is a measurement of how well colors match their target colors. 0.0 is a perfect match, while 2.0 is the largest level that is indistinguishable to the human eye. It’s not uncommon for consumer monitors to have Delta-E numbers above 8.0 . In fact, all but one were below 0.75, for an average of 0.55. Pretty impressive. ΔE measures are listed below.

It’s also important to consider that the SW240 is a 10-bit monitor2 Though listed as 10-bit, it achieves that depth with an 8-bit panel and Frame Rate Control (FRC) to provide additional tones. More expensive monitors, like the SW271, use true 10-bit panels. The SW2700PT also uses 8-bit + FRC with 14-bit 3D LUTs, which means that it can display more separate colors within those color spaces. This will reduce banding and posterization when you’re looking at smooth gradients in your images. A 10-bit monitor makes significant, visible differences in the tonal gradation of skies, for example.

Bit-depth is especially important when you’re working with black and white images. Standard monitors display 8-bits of tonal range usually 3 Frequently, they use 6-bit panels and they use FRC to reach 8-bits. , and 8-bits contain only 256 shades of grey, including pure black and pure white (whereas color images combine 256 shades each of red, green and blue to form 16.8 million colors… 256 x 256 x 256). 10-bits, on the other hand, gives you 1024 monchrome shades to work with. If you’re working with a 16-bit image in Photoshop (from a 12 or 14-bit RAW files), your image will contain dramatically more shades of grey than a standard monitor can display. These missing tones will appear as banding and loss of highlight and shadow detail. A 10-bit monitor display won’t fix the issue completely, but it will give you 4-times as many tones to work with and serious improvements in image quality. 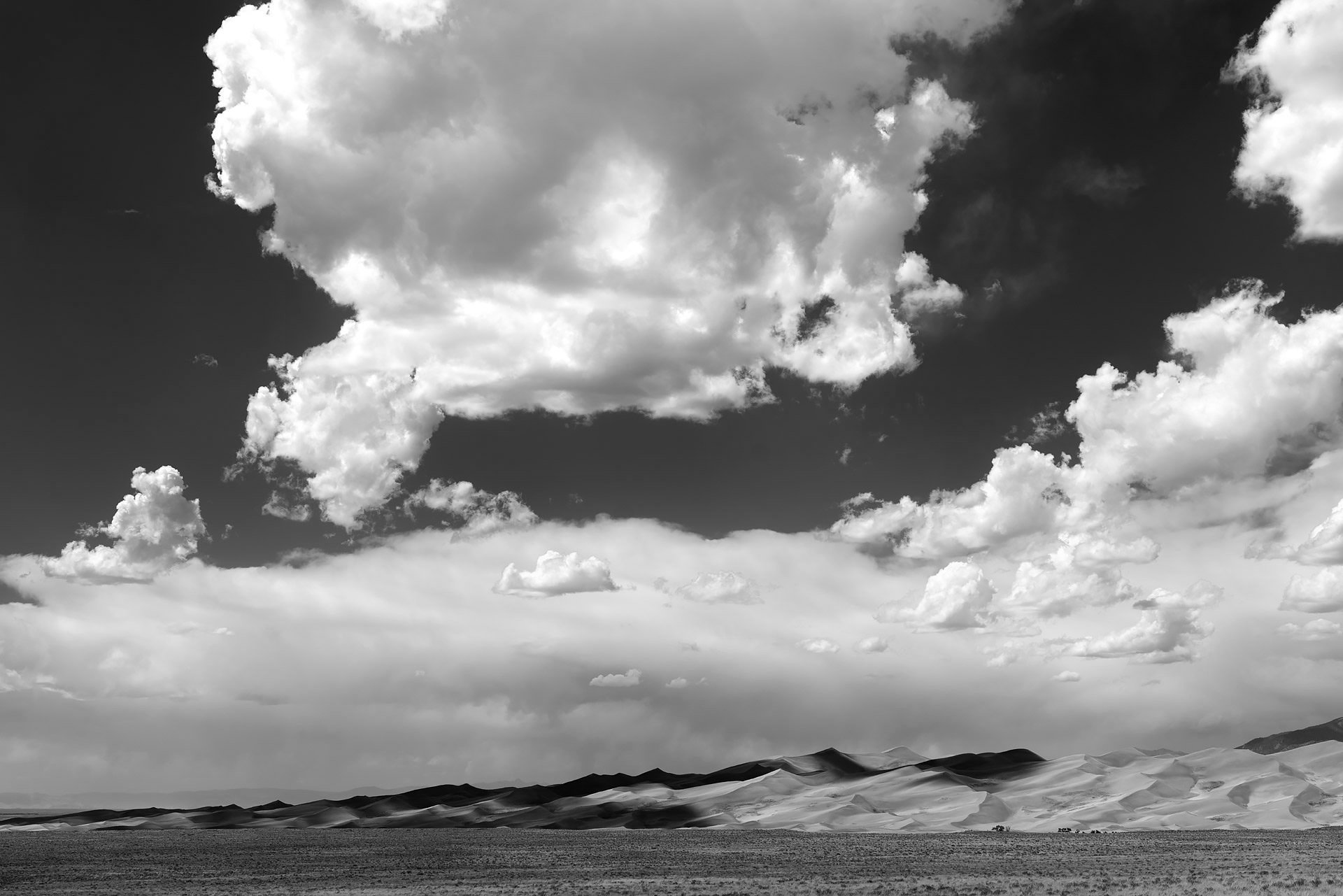 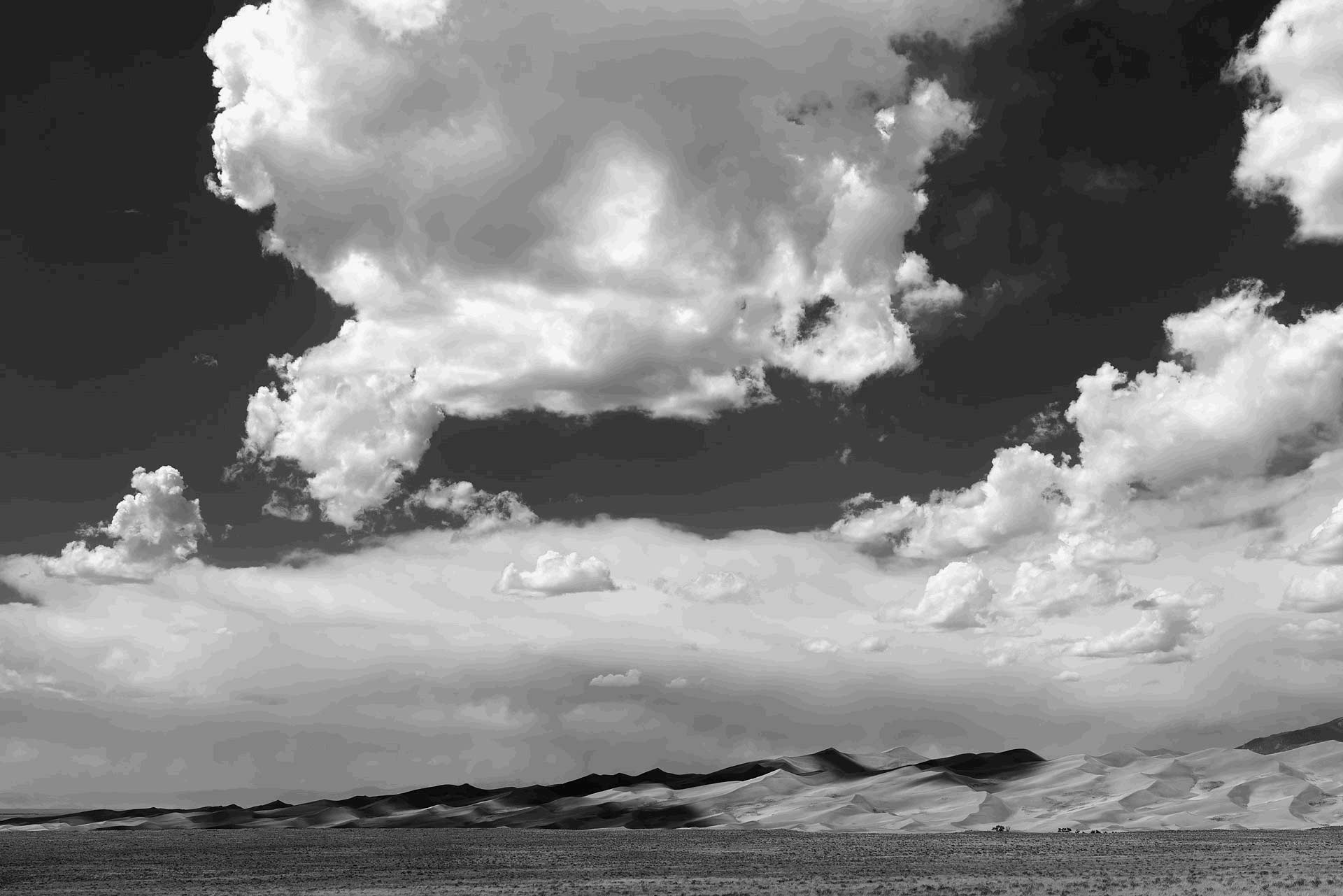 Since JPGs are always 8-bit, I can’t show you the real difference between 8 and 10-bit greyscale, but I’ve simulated the general idea of it in the example above. Pull the slider left to reveal the image below.

The SW240 and the SW2700PT use 8-bit panels and Frame Rate Control (FRC) to reach the display of a 10-bit tonal range. More expensive monitors, such as the BenQ SW271, use 10-bit panels to natively display the higher bit depth without FRC.

Working with the Monitor: General Opinions

For anybody who doesn’t absolutely need 4K resolution, the SW240 provides excellent value: color that rivals monitors that cost $1000-2000, with even backlight and attractive design. Its thin bezel is the best in the lineup.

We spend thousands of dollars on cameras with the best sensors to capture a wider range of colors and lenses that render better color. Doesn’t it make sense to use a monitor that lets you see that color?

The 16:10 ratio screen size is a nice option for those of us who work on still images from DSLRs or mirrorless cameras that are the standard 3:2 ratio, rather than the wider 16:9 ratio that is common for wide-screen video. The taller 16:10 screen allows us to view a 3:2 image at a larger size without cropping off the top and bottom, and I appreciate the extra height while web-browsing or reading PDFs with side-by-side pages.

I didn’t miss the quick-change controller puck that came with the 27″ BenQ models; the hot-key on the monitor was just fine for the frequency that I switch between profiles. The placement of the USB expansion ports was also not a concern for me, since I have other ports handy on my desktop anyway (and these two have permanent residents), but I was annoyed at the placement of the SD card reader, which I would have used if it hadn’t been buried on the back side of the screen.

If I had to choose between getting a FullHD monitor with great color and a 4K monitor with unreliable color, I’d take the great color every time. I imagine that this will be a decision that crops up for many people looking for  a new monitor, considering the popularity of 4K video these days, but not everyone will be willing to spend the extra money on a monitor like the BenQ SW271 to get both. For me, being able to get reliable color in prints and being able to see the full range of colors in my photographs is much more important than a modicum of extra detail.

Any photographer who has seen their photographs in wide-gamut color knows how much better they can look, but many are not willing to pay the bloated prices of AdobeRGB monitors made by the likes of Eizo and NEC. The SW240 is a monitor that looks incredible and that any serious enthusiast can afford, at about $399.

There’s also some stiff competition from companies like Dell. The Dell UltraSharpÂ UP2516D 25″ monitor costs about the same ($408), but it’s a higher resolution QHD monitor. Those who are more interested in video editing may be tempted by the 10-bit AOC U3277PWQU 4K monitor, which claims wide-gamut coverage, but not AdobeRGB specifically. At only $400, the cheap AOC is tempting because it’s a large 4K monitor, but its color accuracy is very questionable.

We spend thousands of dollars on cameras with the best sensors to capture a wider range of colors and lenses that render better color. Doesn’t it make sense to use a monitor that lets you see that color?

I strongly recommend wide-gamut monitors to all photographers, and this one in particular is a solid choice. The monitor is well made, has reliably excellent color, and the backlight gives me very little to complain about. At $399, it’s a good deal, but not as much of a standout as BenQ’s 27″ models; I’d love to have seen the hood included, at this price. For me, BenQ’s monitors have had fewer quality control issues than Dell’s similarly priced models, but if you can find a good Dell UP2516D, it’s worth seriously considering. All things considered, the BenQ SW240 is a solid choice for photographers who are looking for their first wide-gamut monitor, but they should also consider the BenQ SW2700PT. 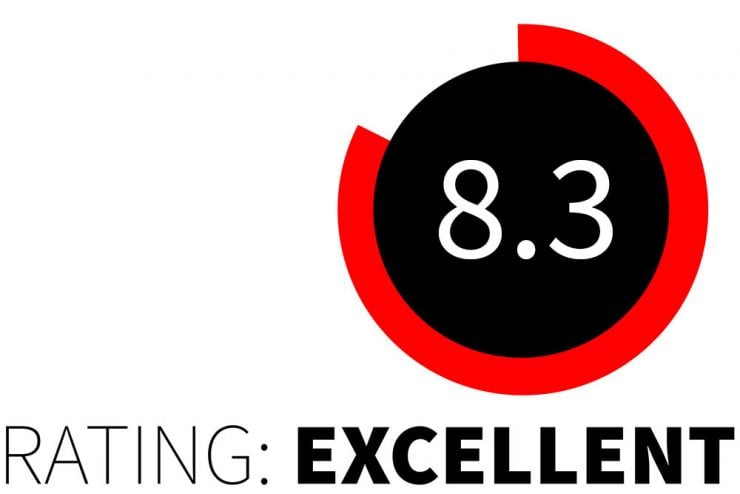