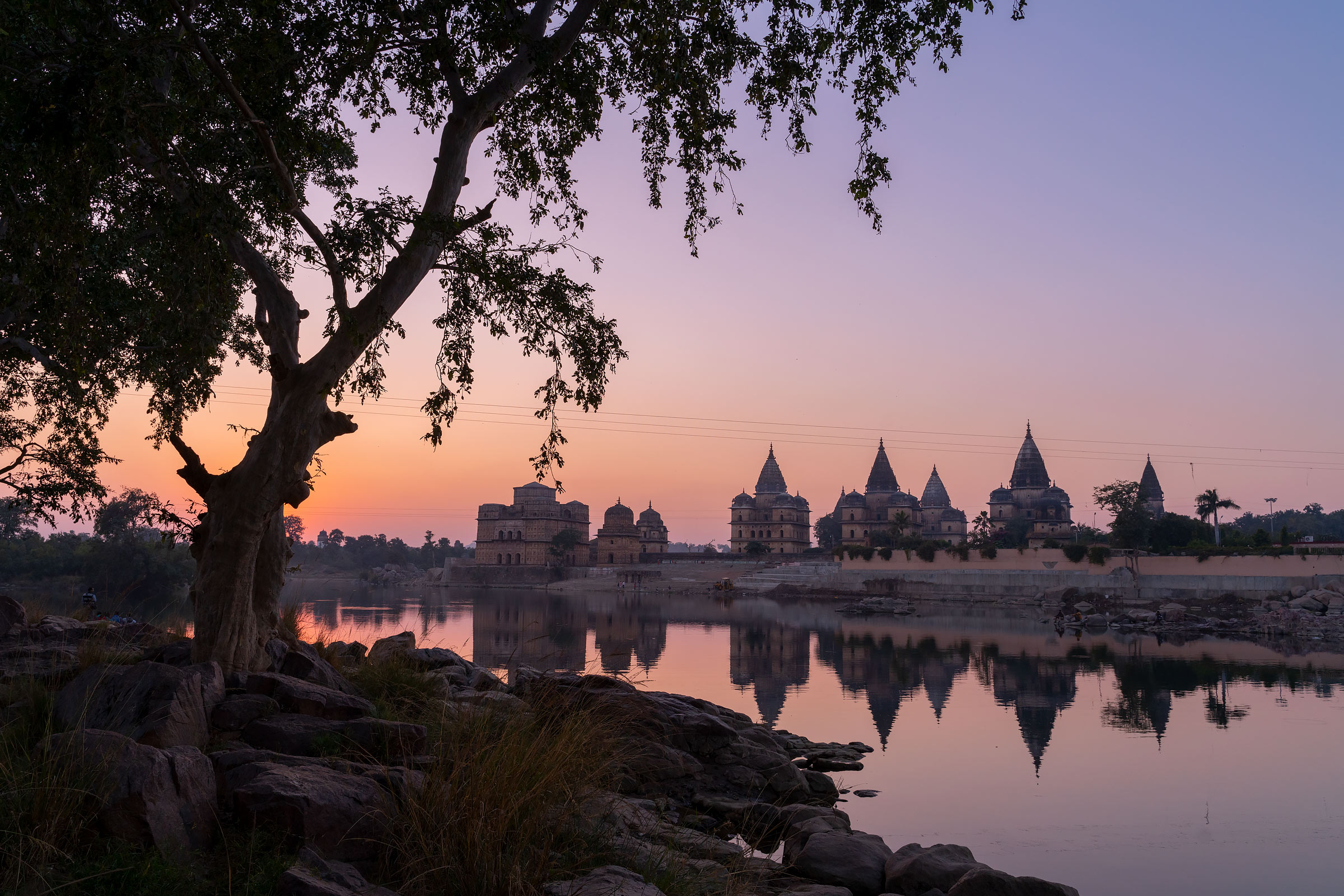 India is so resplendent with attractions that it’s not surprising to discover that some breath-taking ones are often overlooked, and the village of Orchha is one of them. In just about any other country, the palaces and monuments of Orchha would be national treasures, pictured on currency and post-cards, featured in documentaries and trampled by herds of tourists. In India, though, Orchha is a quiet village (by Indian standards), and although not completely forgotten by tourists, it seems positively desolate after visiting the Taj Mahal, Golden Temple, and Mughal forts of Rajasthan.

The main palace in Orchha, a national heritage site, has been partially converted into a hotel (the MPT Sheesh Mahal), and offers beautiful, comfortable rooms and suites that overlook the entire river and fort complex, and my room cost about $60 per night (but $40 modern accommodations next to the river are available, or even $10/night budget places).

Across the river from the main palace is a small town and a complex of ornate Royal Chhatris, cenotaphs1Cenotaphs are memorial monuments but do not actually contain human remains, unlike mausoleums or tombs. for members of the Bundela royal family and date back to the early 16th century. Unlike the Taj Mahal, which is a proper mausoleum, the 15 chhatris of Orchha are only monuments, built at the cremation sites of the Hindu rulers. This is a little unusual; the Taj Mahal and many of the colossal monuments in India were built by Islamic rulers of the Mughal empire.The largest of the chhatris consist of a multi-story rectangular base supporting a towering central cone and some smaller turrets; they reminded me of similar structures that I had seen in Gwalior and Mandore Garden, but they were unique in their scale… and not unlike Angkor Wat in Cambodia.

On the River Betwa in Orchha

After getting settled in my room and admiring the view over the town, I wandered down the hill and across the river into the village, and then further down the hill to an old stone bridge that spans the Betwa River and serves as a central gathering place for the residents. South of the bridge, on the stone steps of the western bank, women washed their laundry and hung it to dry. Below the bridge, men and children bathed in the water while others tended fishing lines. As I sat and watched, groups of women emerged from the forested hills on the far side of the bridge, carrying large bags or bundles of sticks on their heads.

I followed the dusty road across the bridge into the Orchha Sanctuary, which I could only assume was a wildlife sanctuary, but the only wildlife that I saw inside its fences were monkeys, which were equally plentiful throughout the town. There was a nominal charge to get in, and it appeared to be the only way to get down to the river shore opposite the chhatris, so I made a mental note to come back later.

As I started to head back into town, I noticed some thieves slinking up to the motorcycles parked near the bridge, and rooting around in their saddle bags while furtively glancing around. The thieves were monkeys. Their hoodlum friends stood nearby and kept an eye out for the owners and egged them on. These were rhesus macaques, and just my first experience with monkeys of questionable character in Orchha that week.

The sun was setting as I climbed the hill to my hotel again, and the view over the walls and turrets was spectacular, but I couldn’t find a good vantage point with an unobstructed view until it was too late. I did have fun watching the monkeys scamper across the walls, though.

The next day, I wandered and explored a bit more. There were a few interesting shops selling fake antiques and paintings, and poked around the village and main Ramraja temple a bit, just to get a feel for the place. It’s always amusing to see the tables of rare brass “antiques” that are “hundreds of years old”, ostensibly covered in dirt and oxidation from their recent excavation… a child’s toy, a decorated elephant, a Hindu goddess… each with a dozen identical ones right next to it.

Not far from the main temple I saw a brightly painted storefront that said “Help Dogs Center Free”, which appeared to be something along the lines of a free clinic, and it reminded me of all of the stray dogs that I had seen all over India. A stray grey dog rested on the front stoop, looking expectantly at the man inside.

In the evening, I returned to the river, this time paying to enter the “Orchha Sanctuary” so that I could easily stroll around the shore. I used some trees to try to frame the chhatris in the background, and took some photos of the monkeys on the rocky shore.

If I wanted an iconic shot of Orchha, I decided that the riverbank in the sanctuary was going to be the place to get it, so I returned the next evening as well, and unfortunately took nearly the same photos as I did the previous day. I felt that I was close to getting something that I’d really like, but something wasn’t quite right.

It may have been the quality of light, which was often hazy and brown. Colors were a little muddy, and I wasn’t getting the sunset glow off of the chhatris that I wanted. But sometimes it’s more important to get something that’s accurate rather than something dramatic, and looking at them now, I think the images capture the feel of India more than contrasty, vibrant images would have.

But I was also having a hard time getting a useful foreground. There were some rocks further up the river, but they were a little far away to be perfect. I experimented with rocks and even the arches of the bridge, but in the end, I think that I liked the riverside trees the best.

Still, on my last full day in town, I left my hotel before dawn to see how things would look in early morning light. The light was cool and blue, and it was so dark that when I tried to take a photo of a man mulling around on the bridge, I couldn’t get a sharp shot.

As I approached the end of the bridge, realizing that nobody would be at the gates of the sanctuary to let me in, I scrambled over a sagging chain-link fence, following on the heels of another man with a camera who had done the same thing. He was kind enough to offer me a hand, but it was a quick hop and I didn’t need it. We parted with a few polite words and both spend the next hour or so taking photos in different areas along the river.

Unfortunately, the morning light wasn’t great. There was some haze around the river, but not a photogenic mist or fog… just some brown smoke and haze. There wasn’t really a sunrise; it just got light out, after a while. I took my shots and they were a little different (as usual, I shot almost exclusively with the Tamron 28-75 f/2.8 on my Sony A7RIII), but they weren’t what I had hoped for.

Back at my hotel the next morning, I had packed up and was about to carry my suitcase down to the lobby to wait for the taxi to the train station when I noticed that on the terrace outside of my room, there were some monkeys playing around with some packing materials from a big box.

I pulled out my camera and edged my way up the narrow stairway onto the terrace, and watched while a pair of the langur monkeys chased each other around, while several others lounged on the sunny stones. Finally, one monkey grabbed the strip of cardboard and carried it out onto a stone wall and the other gave up. I turned to head back down the stairs, but realized that there was a monkey blocking my way, sitting on the wall at the top of the stairs, glaring at me.

Without a noise that I could hear, the rest of the monkeys snapped to attention and strutted over to the aid of this gate warden. I didn’t want to disturb them… I just wanted to go back down to my room, but there was no way to do it without passing the gathering monkeys. A moment later, I was looking at a dozen large langur monkeys surrounding me in a half circle, with my back to a high stone wall. One of them suddenly rushed at me, slapped my leg with his hand and scampered back a few steps.

“Am I about to get attacked by a troop of monkeys?!?” I frantically asked myself, trying to simultaneously figure out my escape and the best way to fend off monkeys attacking in concert. My girlfriend was on the terrace below, talking loudly in Hindi on the phone, and when I tried to get her attention, with non-threatening movements (and probably a crazed look in my eyes), she smiled and waved and turned away to concentrate on her conversation.

I’d like to be able to say that I came up with a brilliant or audacious plan, but what actually happened was that I made a short bellowing noise and shuffled towards the monkeys nearest the steps, and they moved aside enough that I could spring between them, past the guard monkey (just inches from my face), and down the steep stone steps at a dangerous speed.

From the bottom of the stairs I turned around, half-expecting a monkey chieftain to be flying through the air at me, but instead I saw them chuckling and making rude remarks as their heads disappeared over the edge of the terrace and they rambled off in search of better forms of amusement.

My girlfriend was just emerging from the doorway to our room, adjusting the big, ornate padlock on the door, and still on the phone. I straightened my clothes and pulled myself together, hoping that I looked relaxed and confident after my morning stroll in the sunshine, and we headed downstairs together to start our trip back to Delhi.