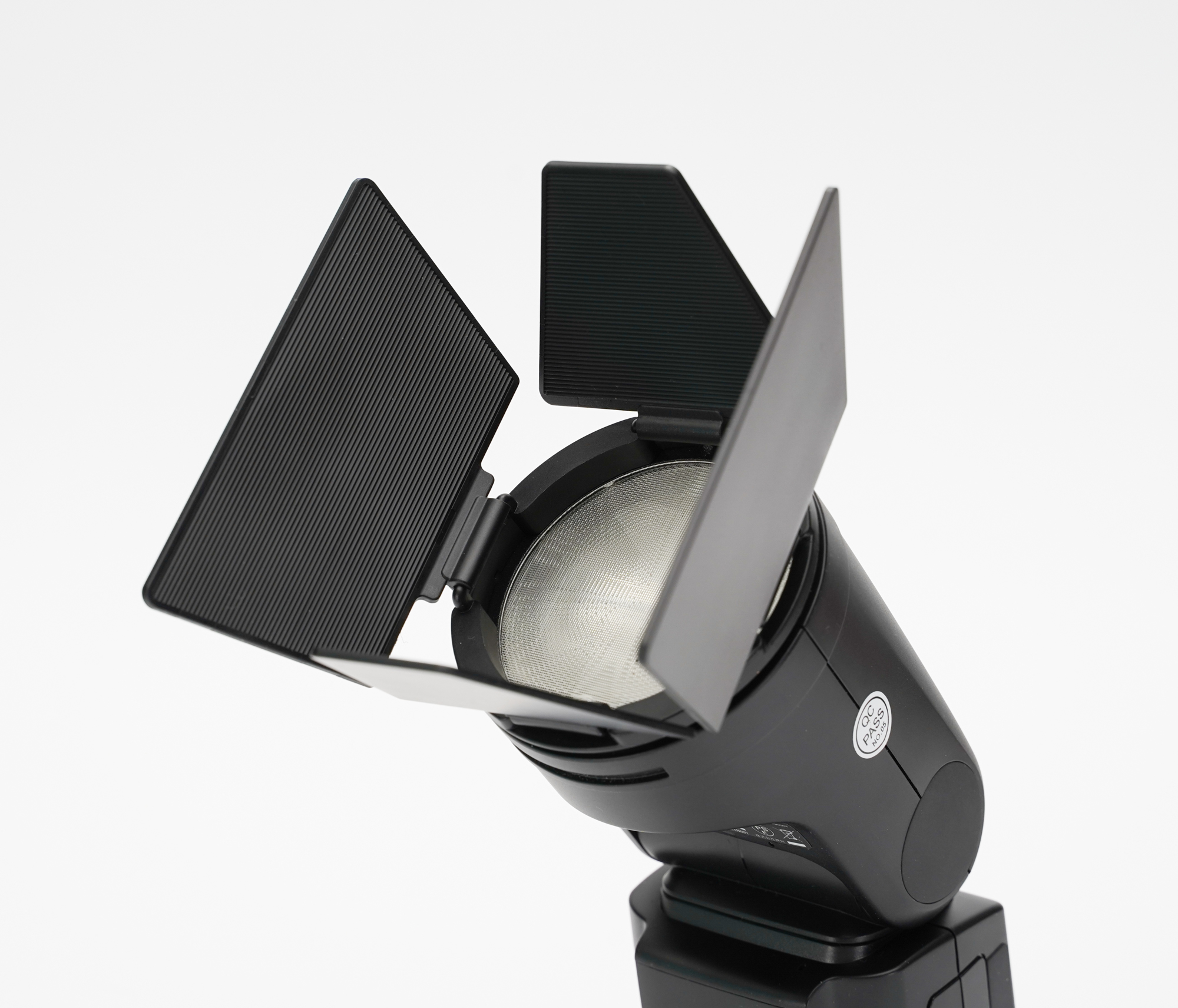 In this article, I take a look at a powerful and versatile hotshoe flash, the Godox V1.

Godox has a full-featured lineup of flashes and strobes. Some of these are powerful, studio strobes, while others are more portable and multi-purposes. The V1 fits among the latter. It is a hot-shoe mounted speedlight, but includes many distinctive features, many of which are similar to the company’s V860 III:

Beyond those, the chief differentiating characteristic of the Godox V1 is of course the head’s shape. Almost all speedlights use a rectangular head, and have done so for many decades. The V1 is different and features a round head. How does this change the way this flash operates? Let’s have a detailed look.

Just like its V860 III sibling, the V1 ships with a full complement of accessories. In addition to the flash, its case and a foot, it includes a battery charger (compatible with batteries for the Godox V860 III and AD100Pro), as well as a quality USB-C cable and a wall plug capable of delivering 2A and 10W.

Apart from the head, the V1 has a traditional speedlight shape. The front is equipped with a focus assist beam, providing a red pattern. The foot is metal, except for the Sony-mount version.

The head can tilt forward, down to -7°, and backwards up to 120°. Most flashes limit themselves to 90° (fully vertical); the backwards tilt makes it much easier, and faster, to bounce the light back and fill a room.

The head can of course rotate horizontally as well, covering 330°.

The battery is the same as the Godox V860 III, but not identical in shape to the one used in the AD100Pro. The battery takes up the whole width of the flash body.

The back shows a large illuminated screen and many buttons. The foot features a quick-release locking lever, faster to operate than a screw-lock.

The main attraction is of course the flash head. It is thicker, but overall not much bigger, than the one on the V860 III. The round illumination can be useful in many situations, to create a more pleasing light pattern.

The head comes equipped with a modeling light, similar to the one on the AD100Pro. The V860 III has an advantage here, since its modeling light sits at the front, and can be used as fill even if the head is bounced.

The head can zoom from 28mm to 105mm. For comparison, the V860 III covers 20mm (14mm with diffuser) to 200mm. The round head of the V1 precludes a wide diffuser. To work around that, Godox offers accessories (see below).

The battery is rated for up to 480 pops at full power, with a recycle time of 1.5 seconds. Decreasing the output power speeds up these numbers considerably. From experience, firing the flash at ¼ power or lower, it can shoot several times per second.

The flash can operate in high-speed sync, up to 1/8000 seconds with a lower output power.

The V1 can use the same accessories as the AD100Pro, which we described here. The AK-R1 kit includes many options and bring the V1 beyond the realm of traditional hotshoe speedlights and into the world of studio flashes.

Godox V1 Compared With Other Options

In some ways, the V1 sits strangely within the Godox lineup. For purely studio work, photographers interested in a compact, battery-powered flash might be better served by the diminutive, but more powerful, AD100Pro. Users simply looking for a speedlight will appreciate the V860 III’s broader focal range, built-in reflector and identical output power.

The V1 sets itself apart from other options on the market by its sheer versatility. Capable of doing almost everything a regular speedlight does, it is also able to operate in a studio and to provide better illumination than a rectangular head. When bouncing the flash, the round head doesn’t matter much, but for direct illumination, or when going through modifiers (softboxes, gobos) the V1 will excel.

The V1’s ability to be easily paired with accessories also increase its versatility. Godox’s magnetic system is inexpensive and works well.

It is easy to imagine a photographer building a compact and portable studio kit made of a few AD100Pros, with one or several V1 for extra versatility.

So what other options are there? There are a few other round-head speedlights on the market. Profoto sells the A10 flash for a whopping $1,095 and Westcott offers the FJ80 for $329. Godox’s V1, with its $259 price tag, is a bargain in comparison.

With the V1, Godox presents another solid product, set apart by its low price point and excellent versatility. The round head is the star of the show, but shouldn’t eclipse the flash’s other qualities.