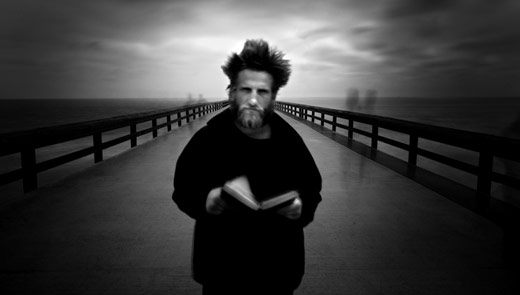 Creating the Image: A Continued Discussion with Cole Thompson

Now long overdue, this is the conclusion of my discussion with Cole Thompson. In my earlier installment we discussed style and art in general, sometimes theoretical terms. In what follows, we discuss specific techniques and equipment, along with the stories behind particular images.

MG: Let’s begin by talking a little about your equipment and technique. I understand that you work digitally these day, and you shoot 35mm rather than larger formats.

Cole: My workflow is entirely digital, after many many years in the darkroom. It’s hard not to be nostalgic. I grew up in the darkroom from age 14… I almost lost my virginity in the darkroom… listened to so much music… never had a suntan …

But let me preface this discussion of equipment about film vs digital, Nikon vs Canon,  and how important equipment is: I look at them as simply tools that are relatively inconsequential to the process. The truth is that any decent camera is way better than most of us are as photographers, and the creativity doesn’t come from lenses (although you know, there are certain times that you need a certain piece of equipment: variable ND filters are a key piece of my equipment) but for the most part, I try to minimize the equipment, I try to minimize the processes, I try to keep things as simple as possible. I’m a techno-phile by nature, and I would spend my entire life gathering equipment and fine-tuning and just never getting out to shoot because I was trying to get the exact right equipment. Because that’s my nature, I have thrown that all to the wind and tried to minimize it as much as possible. I happen to use Canon, just because the first SLR that I ever bought in 1968 was a Canon and I just know Canon, but they’re all good cameras. I shoot with a couple of cameras, but mostly shoot a 5D Mark II.  I actually prefer it to the 1Ds Mark III. The one issue is that you need to be careful around rain. I go to Bandon, Oregon to shoot every year, and I take my 1Ds because I know it will be raining.

I love digital. Yes, I have fond memories of the darkroom, but I can do so much more, so much more quickly with digital, and my work has never looked as good. As to the people who like to say that the prints don’t look as good, that they don’t feel the same, I’ve gotta tell you… all the time people come up and ask me, “is this film or digital?”, or they assume that it’s film, and they start talking to me, bashing digital, like I’m not one of them. So, I think that’s all like the old guys who still believe in tube amps or turntables; but it’s really the music that’s important, not the equipment that it’s played on.

Cole: With digital, I’m still a minimalist. I have a procedure that I’m comfortable with, and I don’t like to vary it simply because I don’t want to add another item to the list that might go wrong or throw things off. I keep it simple so that if something breaks, I can fix it easily.

MG: Do you have a particular set of lenses that you like to use? I don’t see a whole lot of your work that’s shot with with super-wide angle, for example, but I do see some wide angle shots.

A tripod is important to me; I shoot almost everything from a tripod, regardless of the shutter speed, I just find it to be a good practice… and a lot of guys like to say that they can shoot at 1/60th or even slower, but shooting hand-held does degrade the image a little bit.

And the neutral-density [ND] filters are important to me. I generally don’t shoot anything at night or in low light. I don’t plan it that way, even my ghosts of Auschwitz series. Everyone thinks they were shot at night… those were full daytime shots! I just have a dark style that makes them look like night-time. Instead, I use ND filters, generally about 13 stops…

Cole: That’ll give me about a 30 second exposure in the brightest sunlight. I do that by stacking an 8-stop ND filter and a 5-stop,  and I just shoot whenever.  I don’t plan out shots. I don’t spend weeks planning out the perfect day and time and location and scout it out, I go and I get what I get. I find that I can go to that spot at completely different times of day and there will be something completely new because of the sun or the clouds, or something.