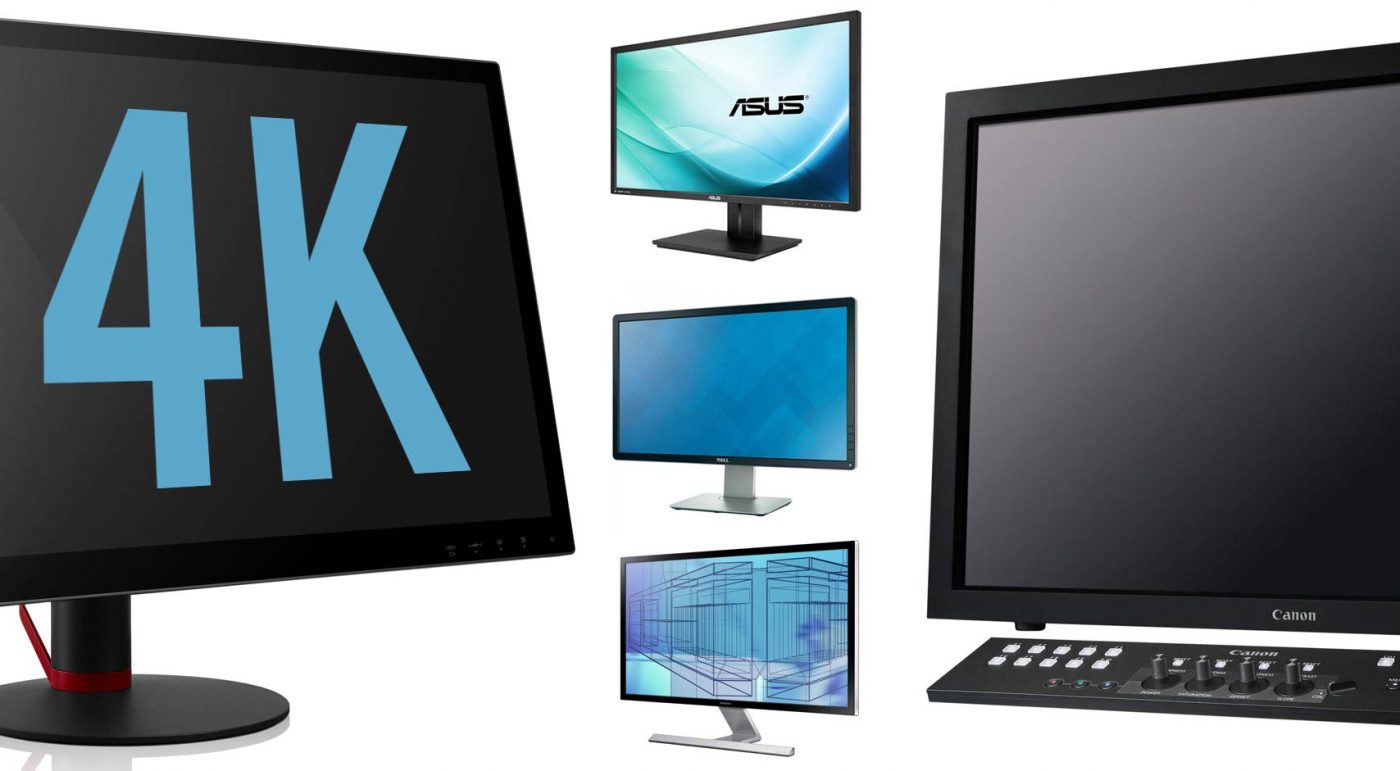 If you’re working in video, there’s a good chance that you’ve either started experimenting with 4K video or you want to. Cameras like the Panasonic Lumix GH 4 and Sony a7s promise to bring high-quality 4K video to the masses; and even the GoPro Hero3+ offers 4k video (at 15fps) while the prices of 4K camcorders and production cameras are dropping into the realm of sanity for amateurs and semi-pros. But what’s the point if you only have a 1080p screen to play it back on?1 (OK, sure… you get some leeway for cropping, maybe.)

And if you’re a photographer and you’ve had a chance to edit images on a smaller retina or other high-PPI display, you know how important that extra resolution is. 4K monitors have the potential to give you pixel density rivaling a retina display at a much larger size, so you’ll get to see more detail and fewer jaggies while editing your images. In fact, once you’ve started editing on a high-PPI monitor, it’s hard to go back. (For comparison, retina displays on 13″ and 15″ Macbook Pros are 220 and 227 ppi).

Time to Get a 4K Monitor?

4K TVs and Monitors have been around for a couple of years now, but their outrageous prices have left them out of reach for most mortal beings, with some (like Samsung’s 85″ TV) reaching as high as $40,000, while Sony’s PVM-X300 video editing monitor costs about $18,000.

But the times they are a-changin’. Today, you can buy a Seiki 39″ 4k TV for a relatively modest $350 if you don’t mind buying from a brand you’ve never heard of before (and a 50″ model only costs $699).  Similarly, Asus, Samsung, Lenovo, and Dell have all recently announced 4K monitors (with HDMI and, importantly, display-port inputs) that will only set you back about $500-700 (prices have dropped by as much as $200 in 6 months), and there are now several 4k monitors intended for professional use as well.

Needless to say, not all of these monitors are created equally; they have different resolutions, different input options, different panel technologies, refresh rates, and mounting options, just to name a few. So, if you’re in the market, I’ve listed some of the front-runners below for comparison, with recommendations further down.

Before you get too excited, lets talk about the problems with some of these monitors, first.

All of the current $700-range 28″ 4k monitors are manufactured with the same TN (twisted-nematic) panel, the Chinese-made Chi Mei Innolux M280DGJ-L30. TN-Panels are cheap, and therefore common for everyday use for home computers, but when it comes to rendering colors, TN performs poorly compared to the IPS (in-plane-switching) and PVA technologies that are used in professional graphics monitors 2 IPS is becoming very common in all higher-end monitors, these days. See my earlier article on IPS monitors for photo editing for more info . Indeed, TN panels not only produce a smaller range of colors than IPS panels, their colors are not very consistent: TN panels produce significant colors shifts when viewed from off-center angles.

It will not come as much of a surprise, then, that early reviews of these monitors by graphics professionals are weighed down with complaints about washed-out color and color shifts; because these monitors are large and used with a close viewing distance, even turning your head to look from the center to the edge of the monitor may cause color shifts.

The only performance advantage that TN panels have over IPS panels is that they have very fast pixel response times. Where IPS panels generally have a grey-to-grey response time in the 7-10 ms range, the TN panels mentioned above all have a fast 1-5ms response time. Unfortunately, though, that response time is often wasted with these 4K monitors because of their…

4K video requires a lot more data per frame than 1080p does (it’s 4-times the screen area, after all), and a single HDMI 1.4 connection simply can’t handle that much data at faster than 30Hz. This means that the Seiki TV mentioned above can only give you a refresh rate of 30Hz at 4K, and the same is true of the Dell P2815Q. Some of these monitors CAN give you a refresh rate as high as 60Hz with the use of the display-port input in “multi-stream transport” (MST) mode, and some can achieve 60Hz via the display-port in SST mode, such as the Asus PB287Q and Samsung UD590. If you are a gamer or want the smoothest motion available, that’s the way to go.

For you video editors, it should be obvious that 30Hz monitors are also not practical for all types of work. They’re simply not capable of playing 50-60 fps interleaved video. By using one of the monitors that gives you 60Hz via dual HDMI connections or, better yet, the display-port, you’ll have more options, but still not the flexibility of a 120Hz display.

To sum up, I don’t recommend any of the $500-600 monitors for photographers who need high-quality, consistent color reproduction, and the same is probably true for video editors, especially those who work with 60i video. For general use, though, and watching movies (which are only 24-30 fps anyway), they’re probably fine, including the cheap Seiki. 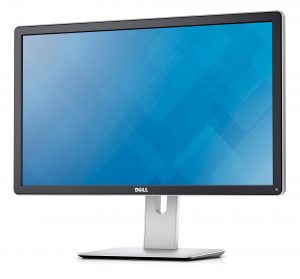 If you want a really great 4K display for photo editing, go with the Dell Ultrasharp UP2414Q, which currently costs $. It’s a little more expensive than the others, but it’s worth it. It has an IPS panel, making it capable of reliably displaying the full Adobe RGB gamut, and it can be connected via the display-port at 60Hz for smooth motion and more video playback options. Because it is relatively small 4K screen, the pixels are nearly invisible at normal viewing distance… and at 185 pixels per inch, the resolution is the best I’ve found on a full-size monitor. It’s also available in a 31.5″ size for $.

NEC’s MultiSync LCD-EA244UHD-BK is possibly even slightly better than the Dell, but at a much steeper price: it currently costs $. I haven’t had a chance to view this monitor yet, but in my experience, NEC makes the best monitors around (with the possible exception of Eizo). The NEC has sensors to adjust the brightness according to ambient light levels and to turn the screen off when no user is present, both of which may come in handy, and NEC’s professional monitors usually allow for a high degree of calibration for uniformity of color and brightness across the screen with the SpectraView system.

Looking for something larger with top of the line quality? The Eizo ColorEdge CG318-4K should be available in April 2015; it’s a 31″, true 10-bit display with a built-in color calibration system. It can display a billion colors simultaneously, including 99% of AdobeRGB. Eizo has a long history of making the best monitors in the world for graphics professionals, but they’re not cheap. The The ColorEdge CG318-4K will cost about $4500.

For something a little more reasonable, the recently announced Asus ProArt PA328Q 32″ 4K monitor has some major advantages over the much of the competition. First, it has an HDMI 2.0 input, so it can support 4K at at least 60kHz. It also comes factory calibrated to display 100% of the sRGB gamut, with excellent color accuracy… and when it’s available, it should only cost around $1700. The advantage of the larger screen size is that the interface on your applications will be much more easily visible, which is a problem with many high PPI screens.

In October Apple announced a new 27″ iMac with a 5K IPS display, and although it is not a monitor (it’s a whole computer), it’s definitely worth considering. The machine starts at about $2500, but the resolution is 5120 x 2880, making it the highest resolution screen available.

If you need a true location-production monitor with the full range of professional video inputs, though, you’re still going to have to spend quite a bit of money. Compared with the price of the Canon, the Sony Trimaster seems positively bargain-priced, but I’ll leave that comparison for someone who has more experience working in video production.

Want a high-ppi laptop? Check out the my article on the best current options for high-ppi photo-editing laptops.

If I haven’t already made it clear, I’m a photographer who dabbles in video, not a film/video expert. I’ll do what I can to answer questions regarding video, but I’m mostly looking at these screens from the perspective of what will work well with Photoshop. That said, please let me know if you have any questions (below) and I’ll at do what I can. Furthermore, if you discover that I’ve messed something up, let me know, and I’ll correct it.