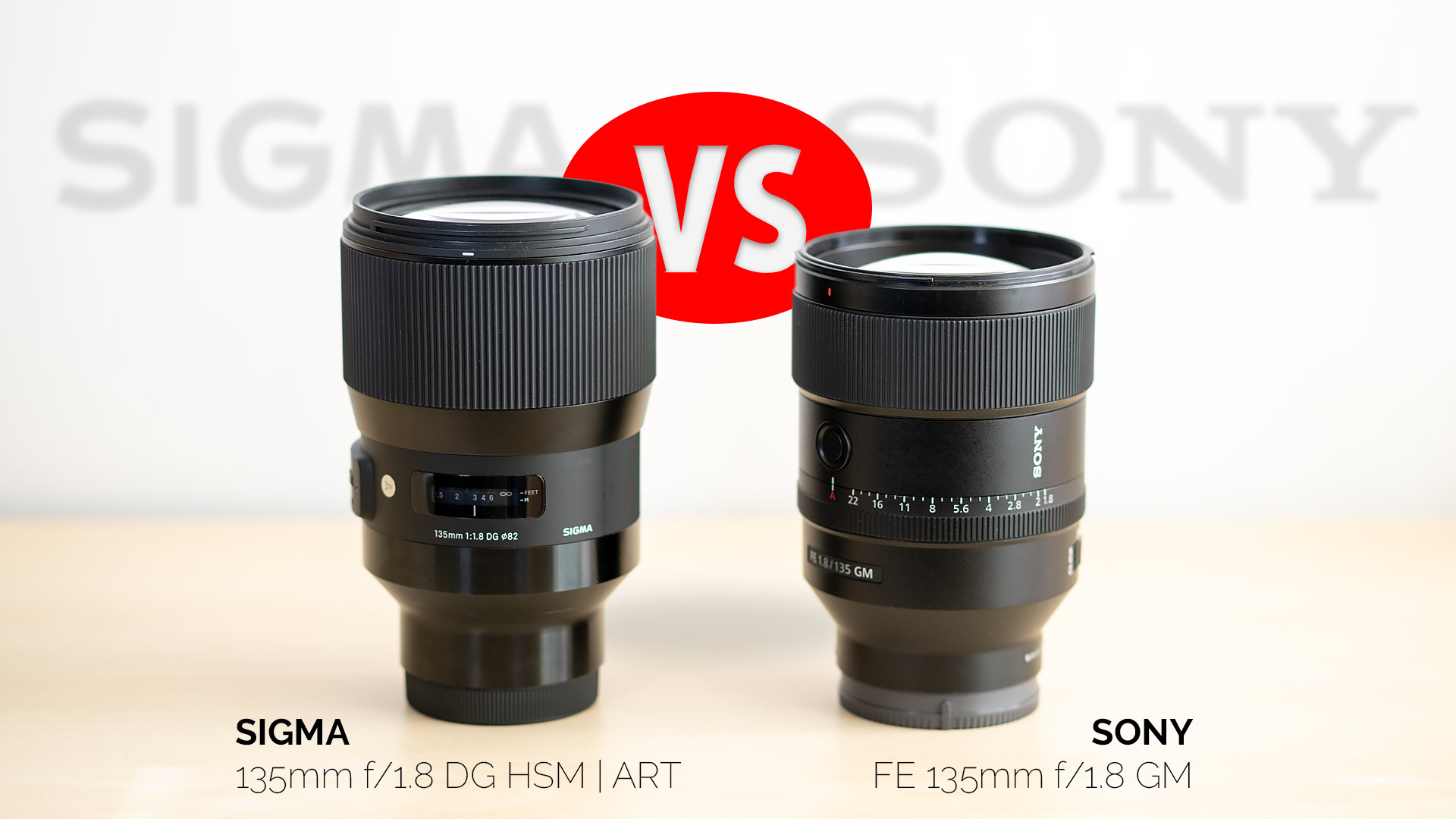 Both are exquisitely sharp, but they're not created equal. Which one is right for you?

Matthew Gore·September 18, 2019
Check Out the Quiz
Watch Video on YouTube

When I heard that Sony had announced a 135mm f/1.8 G Master lens last winter, I knew that I would have to see how it compared with the excellent Sigma 135mm f/1.8 ART series lens that was announced in Sony E-mount the previous winter. The Sony lens immediately received accolades from LensRentals.com for being the highest resolution lens in its class, but the Sigma 135mm ART was already one of the sharpest lenses I’ve used… and at some point, there are diminishing returns.

Last May, I finally got my hands on both of them at the same time. As I expected, the Sony had some advantages, but it it wasn’t perfect either. Which one should you buy? My assessment is below. I’ll keep it brief this time.

Like all of the lenses in the “Art” and “G Master” lines, these two lenses are sturdily built and feel like professional tools. Both have some degree of weather sealing and 82mm filter threads.

The Sigma lens weighs a full half pound more than the Sony lens, which may not sound like much, but it feels quite a bit more bulky. The Sigma is also a half inch longer.

When it comes to features, the Sony has a manual aperture ring and a customizable focus-lock button on the side, while the Sigma does not. The Sigma does, on the other hand, have a focus distance window, for those of you who use them.

Both lenses will give you excellent resolution across the entire frame, even wide open. However, the Sigma ART is slightly softer than the Sony between f/2 and f/4 away from the center of the image (where they’re pretty much indistinguishable, to my eye).

However, the difference is minimal, and of little practical importance. If you absolutely need the sharpest lens, go with the Sony. If you’re a normal portrait photographer who loves sharp images, you’ll be happy with either one.

The “f/4” problem that I first encountered in my comparison of the Sigma 24mm f/1.4 ART series lens with the Sony equivalent has reared its ugly head again with the 135mm f/1.8 ART.

In all of my test shots, the Sigma produced images at f/4 that were slightly blurry compared to those shot at f/2.8, for reasons that I can’t explain (but must have something to do with the Sigma’s firmware). This is very unusual; generally with a full frame sensor, resolution improves as you stop down from wide open until about f/8.

I’m awaiting further information from Sigma at this time, but expect that it will eventually be fixed with a firmware update.

The Sony 135mm f/1.8 GM lens uses a fast, dual-linear motor system that makes its autofocus very quick and accurate. I tested it by shooting a few basketball games in poorly lit gyms, and it performed amazingly well. For more details, read my post about shooting basketball with the Sony 135mm GM lens.

With the Sigma, I shot some basketball and also shot a labor rally in Seattle that included a troupe of Native American / Aztec heritage dancers called “Ceatl Tonalli”. In both cases, the Sigma lens performed well, and I got plenty of sharp shots. That said, focus felt a little sluggish compared to the Sony, and I occasionally felt that the lens would “give up”, and stop hunting for focus for a few seconds.

Ultimately, either one will focus fast enough and reliably enough to shoot events such as weddings and children at play. For news and event coverage, I’d recommend the Sony.

The importance of bokeh is probably overblown, and certainly a matter of personal preference, but there are a few things that can be objectively said on the subject.

Neither lens produces onion rings or strong color fringing in the bokeh, although both lenses do include automatic correction profiles in Lightroom/ACR, so I may just not be seeing the fringing. I find the rendering of highlight ball (bokeh balls) to be very similar between the two lenses.

More generally, I find that the Sony lens, being slightly more contrasty overall, produces a more contrasty bokeh, which is consequently less smooth. I find the bokeh of the Sigma to be smoother and more pleasing, but others will certainly disagree. Both lenses can produce some more “nervous” areas when fine details are involved, but nothing unusual for lenses of this type.

I did not test to see which one produces colors that are the most “accurate”, which is fraught with difficulty.

The Sony 135mm f/1.8 GM lens costs $2099, while the Sigma 135mm ART costs $1399 (currently less), a difference of over $700. For that premium, the Sony is slightly sharper, a half pound lighter, and provides somewhat better autofocus performance.

For most portrait photographers, the difference in resolution will make no practical difference, though it’s just barely possible if you’re printing large images that are intended for a close viewing distance.

Similarly, the difference in autofocus speed between the lenses will not be important for most portrait shooters; the Sigma locks on eyes quickly and accurately if you use eye-focus in your camera.

Anyone who travels or carries around lenses will appreciate the lighter weight of the Sony lens; but will it be worth hundreds of dollars to you? You’ll have to decide for yourself.

In the end, the Sony is better all around… almost. It’s lighter, faster focusing, and higher resolution and sharper.

It is also $700 more expensive (currently), and most of its advantages are modest (and in some cases, negligible).

If you’re looking for the sharpest lens, and a fast focusing, lightweight lens for travel or event coverage, spend the extra money for the Sony.

If you’re a portrait photographer, I find the bokeh a little nicer on the Sigma (but choose the lens according to your own artistic preference) and it’s significantly less expensive .

If you have any questions about this review or the lenses in it, or if your experience is different from mine, please let me know in the comment section below. Additionally, if you can confirm the existence of the “f/4” problem on your camera and lens, please let me know!