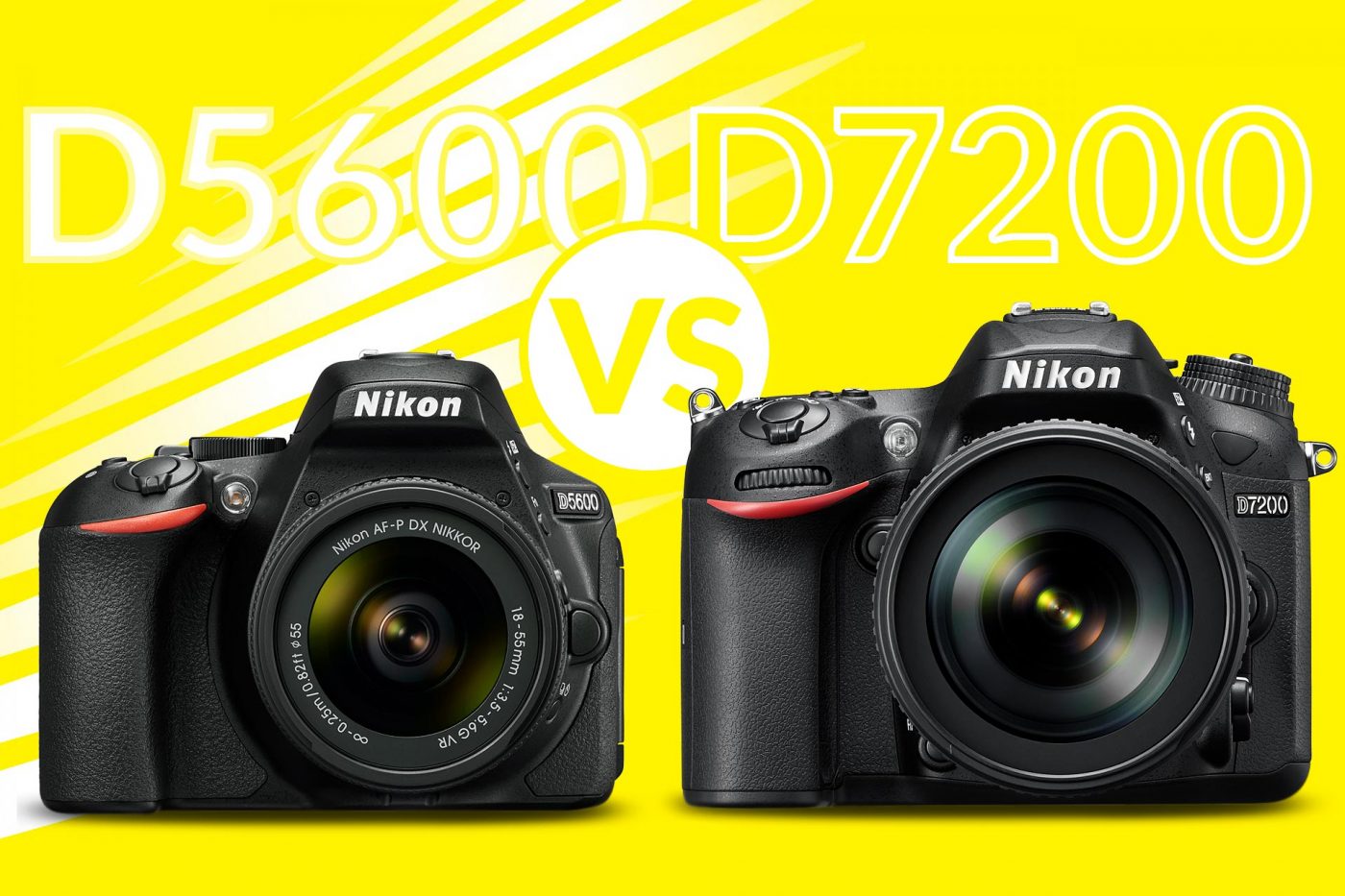 The Nikon D5600 is a very minor upgrade over its predecessor (the D5500), but still offers strong competition to the more expensive D7200, providing identical image quality. If you’re having a hard time deciding which one to buy, my general advice is always this: buy the least expensive camera that will meet your needs, and buy the best lenses that you can afford. Below, I’ll cover the differences between these cameras and explain which types of photographers will find the different features useful.

But first, if you’re deciding between D5600 and slightly older D5500, here’s the difference:

That’s it! The D5500 and D5600 are virtually identical otherwise, so as the price drops on the D5500, many photographers who don’t care about these minor upgrades will be able to pick it up at a great price. Currently, the D5500 body costs $ while the newer D5600 body costs $.

Perhaps the most obvious difference between the D7200 and the D5600 is in their construction. The D5600 body is significantly smaller and lighter, built of carbon-fiber reenforced plastics (Sereebo), while the D7200 is heavier and built for durability, with a metal (magnesium alloy) back and top, and importantly, it is weather sealed. Since the D5600 also uses a smaller battery, the carry-around weight of the D7200 is about 40% more1 Actually 38.6% than the D5600.

Whether this is an advantage or disadvantage depends on your photographic needs; some photographers (especially those with larger hands) prefer a larger camera with some ‘heft’ to it, while others prefer something more lightweight and easy to carry around, especially travelers and hikers. Needless to say, those who work in harsh conditions will usually prefer the D7200’s weather sealing and heavier-duty construction, as a matter of practicality.

Like the previous generation, Nikon’s D5600 and D7200 both have 24-megapixel sensors, and neither one makes use of an anti-aliasing filter. Consequently, if you shoot RAW files, you will not be able to detect any difference in image quality between these two cameras, and since both cameras use the same processor, the JPGs should be equally indistinguishable, though shooting JPG creates many opportunities for differences to creep in.

More AA Filter Info
The success of the D800e may have led directly to Nikon’s decision to produce an APS-C camera without an optical low-pass/anti-aliasing (OLP/AA) filter, but whatever led to the fact, the D7200’s sensor is naked. Before the D800e, all of the major SLRs produced their sensors with an AA filter: essentially an extra layer in front of the sensor that blurs the image slightly, in order to reduce the jagged edges and moire 1 that have traditionally been associated with digital capture. With modern improvements in image processing software, though, Nikon was confident that the moire and jaggies could be avoided without the AA filter, so they opted to remove it2 To be more precise, the Nikon D800e does have an AA filter, but it also has an AA-canceling filter, so it does not have one in practical terms. The D810 does not have an AA filter at all, nor do the D5500/D5600 and D7200. and allow the cameras to capture finer image detail.

With the success of the D7100, Nikon also decided to remove the AA filter from the D5300 and D5500’s sensors, and now the D7200 and D5600. For all practical purposes, there is no difference between the sensors the D7200 and D5600, so there should be no difference in image quality if you shoot RAW. Though this lack of AA filter does provide the potential to for the camera to produce sharper images, don’t expect too much.

Why does that matter?
Comparisons of images produced by the D800 (AA Filter) and D800e (no AA Filter) have shown that the principle works; there are subtle improvements in fine detail in the D800e’s images. However, we should not expect such significant improvements in the D7200’s images. The receptors on the 24 megapixel sensor of the D7200 are already much, much smaller than those of the D800e. In fact, the D7200 and D5600 fit about 56% more pixels into the same sensor area as the D800e.

Why does that matter? Even with the much larger receptors of the D800, lens resolution has become a serious bottle-neck for image quality. Nikon has already produced a special list of lenses that can allow you make the most out of your D800 sensor. The dramatically higher pixel density of Nikon’s 24-megapixel APS-C sensors (which is even higher than that of the Canon 5DS R’s 50 megapixel sensor) will tax lens resolution even more, meaning that the D7200 and D5600’s images won’t get much sharper unless lenses get sharper first.

When the Nikon D5500 was announced, its 39-point autofocus system (9 cross-type, adopted from the Nikon D7000) was significantly better than its competitors like the Canon T6i and 70D, which had only 19 auto-focus points (though all 19 were cross type; click here for an explanation of what cross-type points are and why they’re so important). However, while the D5600 was announced with no upgrade in the AF system, Canon has upped their game, with the 80D and now T7i/77D housing AF systems with 45 AF points, all of them cross-type.

The D7200, however, shares the same AF system with the once-flagship Nikon D4 and the D810: 51 AF points, including 15 cross-type… the best system available in a Nikon body.

For all but the most dedicated action photographers, though, the system in the D5600 will be more than sufficient, even if you’re buying a camera primarily for shooting sports. If your paycheck is going to depend on your focusing system, though, the extra several hundred dollars will be well spent on the D7200.

However the D7200 has a significantly larger buffer, allowing longer continuous bursts of shooting. While the D5600 (and D7100) can only shoot 6 14-bit RAW files in a row before filling the buffer and getting bogged down, the D7200 can shoot 18 RAW images in a row, three times more than the D5600.

Flash. With the popularity of off-camera lighting (aka,“Strobist”) techniques over the past several years, flash photography has become increasingly important to amateur and professional photographers, and this is where the D5600 falls short: it lacks high-speed-sync3 For a quick explanation of what high-speed-sync is, watch our video here. (Auto FP Flash, henceforth AFP) and external flash control with the built-in flash. External flash control may not be a big deal; many of us prefer to use radio-units anyway… though the built-in IR system can be very useful with Nikon’s Creative Lighting System (CLS). Hot-shoe mounted flashes with commander-mode capabilities (such as the SB500, SB700, SB5000) can be used on the D5600 and D7200 to control CLS slave flashes.

The lack of AFP, however, is a serious problem. Consider this situation: you’re shooting a portrait outdoors during the day, and you want to use a large aperture to blur the background… perhaps f/2 or f/1.4 . Even at ISO 100, this will push your shutter speed beyond 1/1000ths of a second, much higher than the camera’s 1/200th sec. maximum sync speed. So, if you want to use a flash to soften the shadows or create a catch-light in the eyes of your subject, forget it: the flash will not sync. The same is true if you want to use flash for sports and a high shutter speed, and while you can purchase external command modules or radio transmitters for off-camera-flashes, there’s nothing you can buy to work around the lack of AFP. You’d need to buy the D7200 instead.

In some instances, a neutral density filter can be used to bring the shutter speed down within the range of the D5600’s sync speed. There are several problems with the method, though: the image through your viewfinder can become quite dark, making it hard to frame your shot and making it hard for your camera’s AF system to pull focus, you lose flash power, if you’re shooting with a telephoto lens, shutter speeds at the camera’s sync speed might not be safe for hand-holding, and they’ll always be too slow for sports or fast action (if you’re balancing flash and ambient light).

There are a few other assorted differences that deserve mention here, but they’re mostly the same differences that we saw between the D5000 and D7000. First, the D5600 does not have an autofocus motor built into the camera body, so it will not be compatible with the full range of (old school) Nikon lenses, while the D7200 does posses the motor. And speaking of “focus”, the D7200 is capable of micro focus adjustments to correct for front or back-focus problems on lenses, while the D5600 is not.

As should be obvious from the images above, the D5600 has an articulated LCD screen, which some people find helpful for ground-level shots and video but others find a breakage hazard (or just a bit amateurish), and it’s also a touchscreen.

The D7200 has dual SD card slots. It can be nice to have two slots if you want to record JPGs to one card and RAW to the other, perhaps sending JPGs to an Eye-Fi card, for example. However, if you only need storage space, a single slot is fine. These days, a good, single 128GB SDXC card costs only $50, and I rarely shoot more than 64GB per day, even at all-day events.

Additionally, the D7200 has two User Preset positions on its mode dial (U1 and U2), allowing photographers to store commonly used groups of settings for quick access later. I’ve never found this necessary, but some photographers find them very useful, and they’re not available on the D5600.

As mentioned above, the D5600 can sustain a full-time connection to your smartphone, if you’re the type of photographer who likes to immediately take a shot and publish it to Instagram or some other social media site.

Finally, if you are interested in video, the D7200 has been given a headphone jack for monitoring audio while you shoot. The jack is absent in the D5600 (and D5500). All of these cameras can shoot video at up to 1080p 60fps.

Which Should You Buy?

The Nikon D5600 and D5500 are great cameras, and I’d recommend them for the vast majority of photographers, with the exception of those who need superior flash capabilities.