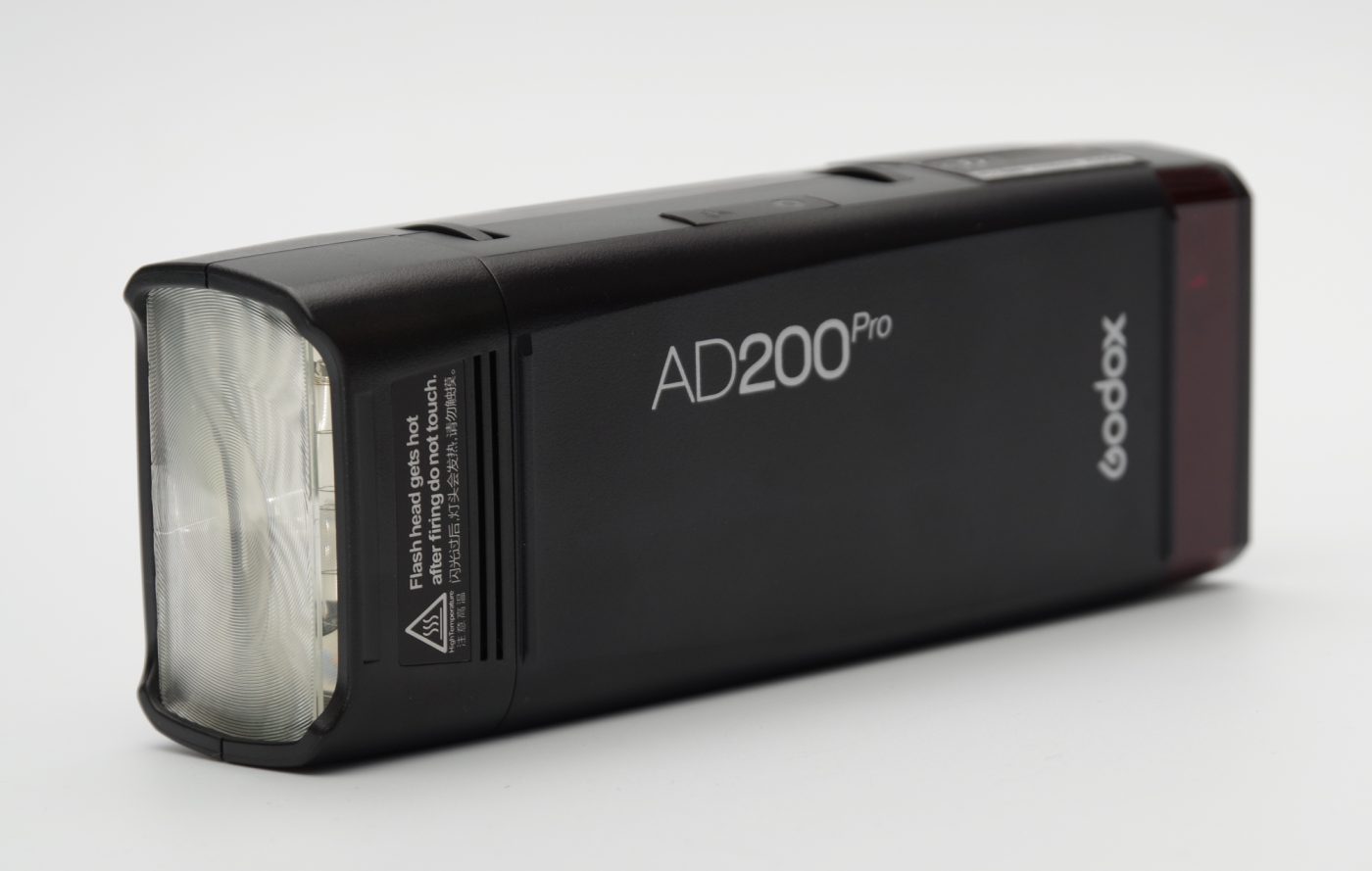 A Beginner’s Guide to the Godox AD200Pro

Today we take a look at Godox’s powerful yet compact AD200Pro flash.

In the world of flash photography, a world of possibilities open when we start to use off-camera lights. This can be done by using a traditional speedlight (which has a hotshoe and can also be mounted on-camera) and a trigger, or with dedicated off-camera strobes. The latter are generally more powerful, but can be large, cumbersome, and come with a steep learning curve.

In this regard, the Godox AD200Pro is a great alternative. The company calls it a “pocket flash” and, even though that might be a stretch (except for deep coat pockets, maybe), the AD200Pro is compact, powerful, and easier to handle than larger strobes.

In this review, we take a look at the features and capabilities of the AD200Pro.

The AD200Pro was released in 2019 as an update to the AD200. The newer version keeps many of the same characteristics as its predecessor, but includes several improvements:

Other than this, the two flashes are essentially similar.

The AD200Pro is a brick-shaped, battery-powered light source. It is rather dense, at 590g (more than a pound). While its diameter is comparable to that of a speedlight, its larger size is obvious when put next to the diminutive AD100Pro. Still, the format makes it easy to mount on any flash support able to hold a rectangular flash head.

Two sides show threaded holes to easy mounting on a light stand. Other than that, the sides are mostly bare. Near the rear are the red optical slave window, the power and battery release switches and the USB-C port.  A small vent for internal heat and ports for wired triggering are close to the middle, and a release switch for the mounted head is near the front (more on this below).

The rear shows the control interface. It is well done, but most of the controls will be adjusted from a remote trigger mounted on camera. The AD200Pro is compatible with all the Godox X triggers, such as the X1T, X2T and XPro. The flash is system agnostic, meaning that it will offer full TTL support and triggering regardless of the camera brand used. In other words, a Sony user only needs a Godox trigger or speedlight made for Sony to control the flash. If no trigger is available, the AD200Pro can function in optical slave.

When controlling the flash via its rear panel, the user has access to 7 buttons and a control wheel. These buttons toggle the Operation mode (TTL, manual, multi-exposure), Groups and Channels, Menu, Wireless mode (radio or optical) or High Speed Sync, Modeling light and Test. The control wheel’s center is the SET button. The screen shows blue text on a black background, nice looking and easy to read.

The standard kit comes with the Fresnel head and a bare-bulb head. Other accessories include a round head (with the same size as those on the V1 and AD100Pro), an LED panel, and a ring flash. An extension cable is also available, allowing any of the accessory heads to be placed farther away from the main unit. Last, it is possible to get a softbox adapter supporting two AD200Pro units, and two bare-bulbs, to cram more power in a single modifier. It is also possible to add accessories to the bare-bulb head itself.

The flash ships in a nicely made carrying case, similar to other Godox products such as the AD100Pro. There is room for the flash itself, its rectangular Fresnel head, the included bare-bulb (which, sadly, must be separated in two parts for storage), the battery and charger, and a lightstand support.

Someone whose experience with flash photography is limited to camera-mounted speedlights is likely to be awed, at first, by the AD200Pro. This flash is different in many ways: it cannot be mounted on camera, requires a trigger, and offers a wealth of new possibilities.

The flash power is the first difference. At 200W, it is three times as powerful as a typical speedlight. Its fast recycle time (1.8s at full power, near instant at ¼ power or below) and high-capacity battery (500 pops at full power, a few thousands at 1/4) make it a workhorse capable to breeze through a day of shooting. The flash carries its own power and can thus be used anywhere without the need for a wall plug.

The convenience of TTL makes it easy to use the flash without extensive knowledge, and the advanced features (including information about flash duration and fine control over output power) let users learn and grow, one step at a time.

Where the AD200Pro truly shines is through its modularity. The basic kit already offers options versatile enough for a variety of scenarios. The extra accessories expand the usefulness of the main unit to almost limitless levels. It also means that, once the original expense has been made, the main unit decreases the cost of ownership of other options. For instance, the round head adapter costs $79 USD (often down to $59), while the company’s AD100Pro costs $198 with frequent rebates, and $299 regularly, while being less powerful. The availability of a bare-bulb lamp as standard opens up many new possibilities, to further improve the quality and spread of the light when using softboxes or other modifiers.

The images below show the output of Godox AD200Pro with the standard Fresnel head and the bare-bulb. The first images shows direct illumination, while the two last show illumination through a Godox QR-P70 softbox.

With direct illumination, the bare-bulb is obviously delivering a more pleasing spread when compared with the direct illumination of the Fresnel head1However, this is only because of light reflected in the room; outdoors, this would not be the case. The face is less contrasted, and the background shows much smoother shadows. When using the softbox (which includes an internal diffuser), the differences are minimal; both options are essentially similar. Using a bigger softbox would have given a slight edge to the bare-bulb given its wider spread.

There are three main reasons to select the AD200Pro over other options. The first is power. To compare, the company’s V860 iii and V1 deliver 75W of power, while being close to the same size (albeit lighter). The AD100Pro is smaller, but provides only 100W. At 200W, the AD200Pro is more powerful, while being much smaller (and less expensive) than the next smallest unit in the company’s portfolio.

The second reason to be interested in the AD200Pro is for its modularity. It is, quite simply, unrivaled in the market. Only one other option comes close, the Yongnuo YN200, an almost-copycat that lacks the options offered by the AD200Pro. It’s less expensive ($189 instead of $299) but only includes the bare-bulb lamp.

The third is integration within the Godox ecosystem. This will not be critical for a newcomer, but current Godox users will enjoy the seamless integration with other Godox products. Users of different camera brands will also appreciate the ability to use the AD200Pro with any camera.

Among the “big players” of the studio lighting market, there are no products truly comparing with the AD200Pro. The Profoto B10 is probably closest, being a 250W battery-powered light with a comparable feature set. It offers more advanced options for color balance, timings and the like, but costs $1795. Interfit’s Honey Badger is a 320W light, but requires AC power and does not support a system as full as that of Godox.

Seasoned studio photographers who don’t need to move around might dismiss the Godox AD200Pro and prefer more powerful, AC-powered lights. For photographers often going on location, or newcomers wishing to go beyond a basic speedlight, the AD200Pro occupies a unique position on the flash market.

With its ease of use, wealth of accessories, powerful output in a portable package, the AD200Pro strikes a good balance between size and power. Calling it a “pocket flash” is a stretch, but it certainly is compact and easy to carry anywhere. Cheaper than many OEM speedlights, it offers more advanced features.

The AD200Pro is a flash with no glaring weakness and a lot of strengths.