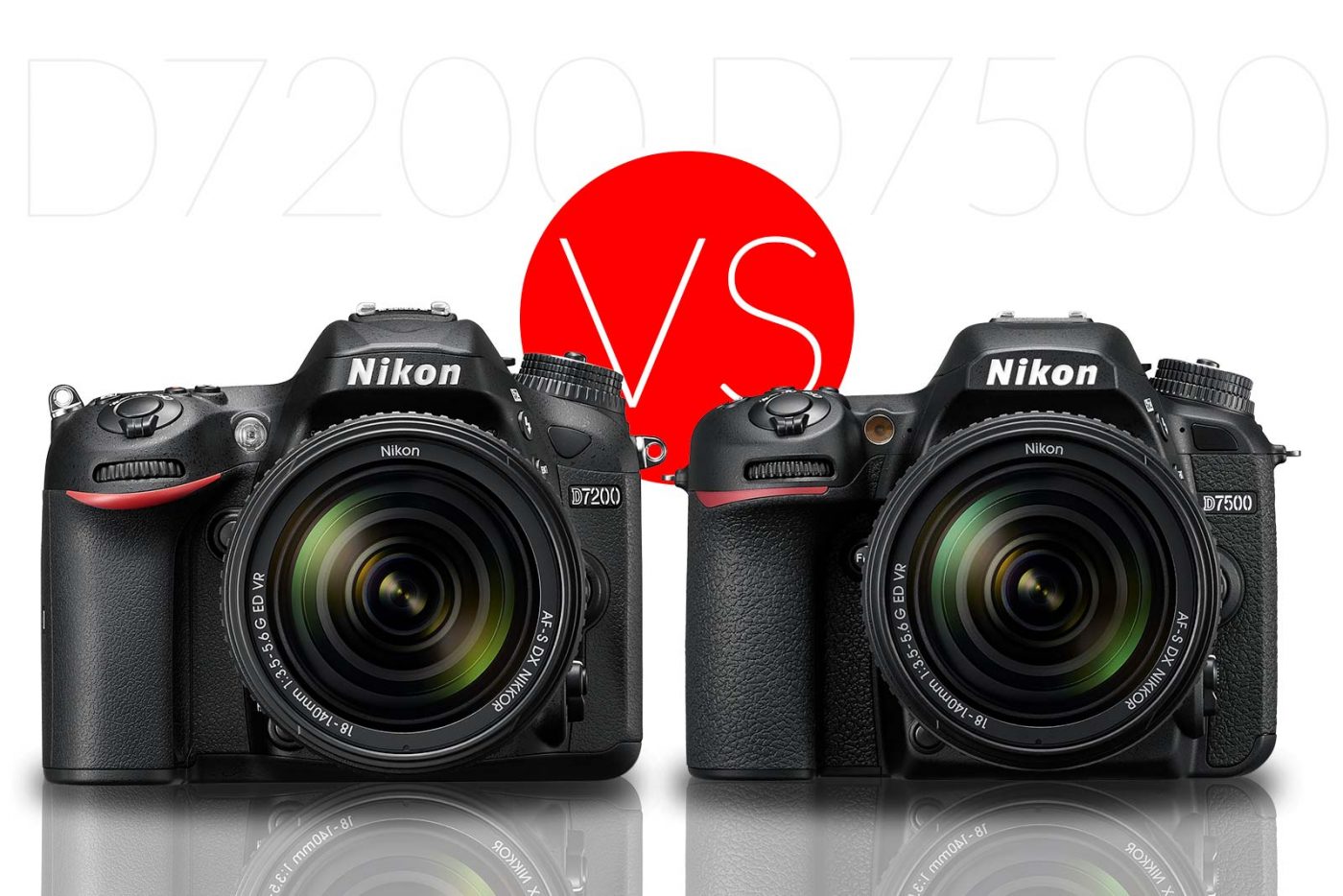 Nikon’s recently announced D7500 has a peculiar mix of features from the D7200, the high-end D500, and the less expensive D5600. In some important ways it improves over its predecessor, in others it seems to be taking a step back. How much difference do these changes make, and which camera makes more sense for you? Let’s take a look.

To begin with, this chart shows the main features of both cameras, with the better features highlighted in green, though in some cases “better” is subjective.

While many of the features of the D7500 have been upgraded to match the D500, the body is now more like that of the less expensive D5600. Having eschewed the magnesium alloy back and top plates found in the rest of the D7000 series, the D7500’s unified frame and body are made entirely of plastics. This makes the D7500 lighter than previous models, and perhaps easier to weather-seal (sealing is very thorough on this model).

Along with the new body material are a variety of changes in design and layout, some minor (like the change in strap connectors and the location of the microphones), and some major, like the adoption of a new battery (EN-EL15a) and the loss of an SD card slot (down from 2 slots in the D7200 to just a lone slot).

Some people were surprised to discover that the D7500’s sensor has lower resolution (20.9 megapixels) than that of the older D7200 (24.3 megapixels). There are a few reasons why Nikon made this choice. (Click Headings to Expand)

First, and most importantly, is Nikon’s concentration on high-ISO performance with the D7500. More pixels on a sensor means smaller pixels. Smaller pixels collect less light, but the sensor’s electronics still generate background noise. This results in a worse signal to noise ratio (like a quiet voice talking in the car over the road noise), and thus, more digital noise in the image that results, especially at high ISOs (where the sensor tries to get by with even less light). The D7500 has fewer ‘pixels’ on its sensor, so they’re larger.

Shooting Action
Second, Nikon wanted to improve high-speed shooting performance to compete with cameras like the Canon 7D Mark II, which can shoot 10 frames per second. These frame rates produces a lot of data for any camera to deal with. At higher resolutions, cameras produce larger files, which are harder to move quickly through the data pipeline to storage on the SD card. A lower resolution sensor’s smaller files are easier for the camera to deal with at high speeds. These smaller files make it possible for the D7500 to shoot 8fps and get the data stored onto an SD card.
Minor Difference in Resolution

And finally, for most photographers, the difference in resolution between 21 and 24 megapixels just isn’t very significant in real-world use. Remember that most of us use computer monitors that are no larger than 4K resolution (about 8 megapixels), but the vast majority use full HD (1080p is just 2 megapixels), and very few photographers print these days. And if you’re resizing an image from 21 megapixels down to 10% of its original size, all of the fine differences in detail will be thrown out anyway.

But if you do print? Then you’ll have to print LARGE to be able to see these differences… probably 16 x 24 inches or perhaps larger, and the differences even then will be minor. And that’s assuming that you are able to capture a difference to begin with. Only the sharpest lenses have high enough resolution to make a difference, and even then, only when shot from a tripod at the lens’ sharpest apertures, with no vibrations from the wind, ground, shutter, etc. A full frame sensor with the same pixel density of the D7500’s 20.9 megapixel sensor would hold 46.5 megapixels, and Nikon has already admitted that not many lenses can meet the demands of the D810’s 36 megapixel sensor.

The D7200 was Nikon’s best APS-C camera for shooting action until the release of the D500, and while the D7500 does not match the D500, it certainly closes the gap. The D7200 can shoot at 6 frames per second, but if you’re shooting RAW, it can only shoot 18 shots in a row (3 seconds) before the buffer is full and it needs a break to write to the SD card. The D7500 improves on both metrics, shooting at 8 frames per second for bursts of 50 frames in a row (just over 6 seconds). The D500 takes that a step further, shooting 10 frames per second for up to 200 compressed RAW shots, but only when using an XQD card.

Of course, if you’re willing to shoot JPG, then the D7200 has no problem, as it is able to shoot bursts of at least 100 shots in that format.

The autofocus system in the D7500 has not been changed; it uses the same 51-point (15-cross type) system as the D7200, while the D500’s system has a total of 153 AF points. However, Nikon claims that the same system in the D7500 will perform better than it does in the D7200 because of the new processor in the camera. This seems very unlikely to be a significant difference.

How important is this difference? Journalists, action photographers, event photographers, wildlife photographers, and anyone else who needs to capture images in copious quantities very quickly might find the extra two frames per second helpful, though casual action photographers will probably not need it. Portrait, landscape, product and commercial photographers? Probably not. Similarly, very few photographer (even those who shoot action) shoot bursts of more than 10-15 frames. The ability to do so will be important for the most dedicated action photographers (who should probably be looking at the D500 anyway), but probably not many others2When I was studying photojournalism in college in the mid 1990s, we were all still using film. Bursts of more than a few seconds could finish off an entire roll of film. Somehow, even the people who were lucky enough to be shooting Michael Jordan and Ken Griffey Jr. managed to produce amazing images with bursts of just 5 or 6 frames at a time. You’ll know from your shooting style whether this will be important for you.

The D7500 shoots Full HD video much as you would expect, using the full width of the frame to capture 16:9, 1920 x 1080 video. You also have the option of capturing that video from a 1.3x cropped section of the sensor (which is, of course, already 1.5x cropped compared to an FX sensor).

However, when the D7500 captures 4K video, you are forced to use a cropped section of the sensor that is even smaller than the 1.3x cropped section that is optional at 1080p. It can be seen in our graphic, below:

This may be perfectly acceptable for those who only shoot telephoto video; it provides remarkably high resolution video and a roughly 1.5x crop, making a 200mm lens perform like a 450mm lens (1.5x crop + 1.5x crop). However, for those times when you want to shoot wide angle, you’ll need to use an ultra-wide angle lens just to get close; while a 16mm lens might normally give you a full-frame 24mm lens’s field of view, you’ll need an 11mm lens to get something almost equivalent if you’re shooting 4k.

So, if you’re looking for a camera just to shoot 4K video, the D7500 is hardly ideal.

However, if you’re mostly shooting 1080p or 720p, then the D7500 has one more trick up its sleeve: digital image stabilization, which can be used in conjunction with optical image stabilization. You will lose a little bit of the frame, but the sensor has plenty of resolution to spare, so there’s no loss in resolution, and the addition of digital stabilization goes a long way towards giving you smooth, jitter-free video. Like the D500, the D7500 will have electronic aperture control while shooting video, as well as exposure smoothing capabilities when moving from dark to bright areas (using auto ISO and electronic aperture control).

The Nikon D7200, unfortunately, does not have electronic aperture control, nor digital image stabilization. It does, however, have 1.3x crop mode, like the D500, and both can output video to an external recorder.

The Nikon D7200 does not support the new Nikon radio-controller (WR-R10/WR-A10) and SB-5000 flash system, which can control up to 18 speedlights. However, there are countless 3rd party radio-triggering systems already available on the market, from pro-level Pocket Wizards and the popular Yongnuo TTL models, Nissin Air 1 Commander and the Phottix Odin, so this should be only a minor consideration for most people.

The new features of the Nikon D7500 will primarily benefit photographers who shoot events and long bursts of action, particularly those who shoot them in low light with high ISO. Those photographers will get better performance with the D7500: better speed and less digital noise. This comes at the cost of slightly lower resolution. Photographers who wish to shoot 4K video and/or use a swivel screen may also find reason to choose the D7500.

However, if you normally shoot at low ISO, and if your primary interest is not fast moving action, then the D7200 will give you equally good results, and in some cases, it may give you better image quality. If you shoot with impeccable technique3 This means shooting from a tripod, with mirror lock up, and a cable release or timer with a top quality lens set in its sharpest aperture range, the D7200’s sensor is capable of capturing more detail than the D7500’s.

If you do decide to buy either one and have found this article helpful, please support us by purchasing your camera from any of the links found in this text, or from the stores listed here: Amazon.com or  B&H Photo.

I’ve attempted to concentrate on the most important differences between these cameras in practical use for photographers who shoot RAW files, but there are other minor differences. They may or may not be relevant to the way you shoot. However, if you still have any questions about which camera you should buy, please feel free to ask me in the comments section below! I’ll answer as quickly as I can.